All Viewings Via Appointment ONLY....Please Call 6100-1717 To Avoid Disappointment

Liv@MB is a brand new condominium located in the renowned residential estate along Mountbatten Road and Arthur Road in District 15.  Developed by leading property developer Bukit Sembawang Estates Limited, this new condominium consists of 4 residential towers with 1 tower of 20-storey and 3 towers of 19-story.  In total the development offers 298 units ranging from 1-bedroom to 4-bedroom layouts to meet the needs of single residents to multi-generational families.

Seated on a large elevated rectangular plot of an estimated 140,760 square feet, this iconic development dedicates 80% of the land area to landscapes, open spaces, and recreational facilities.  One of the key attractions of this residence is its close proximity to Katong Park MRT which is located about a 3-minutes walk from the residence.  The development is also well connected to the East Coast Parkway (ECP) and this enables a short commute to the city, Central Business District, and Changi Airport. 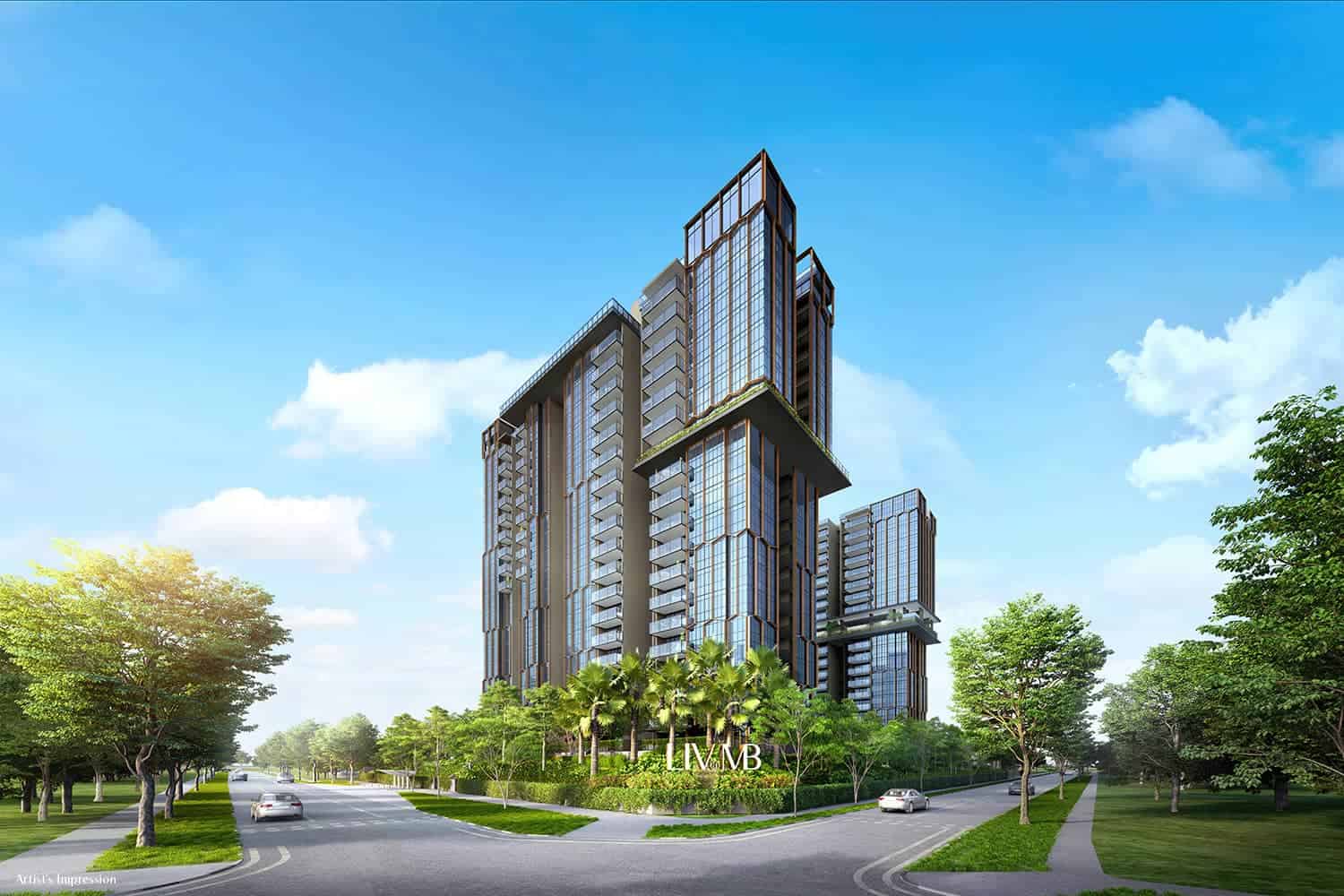 In terms of amenities, Liv@MB is surrounded by many famous eateries in Katong, Joo Chiat, Tanjong Katong, and the famous Old Airport Road Food Centre.  The area is also close to many shopping malls such as Parkway Parade, Kallang Wave Mall, and Suntec City Mall.  Parkway Parade is the nearest shopping mall, located only 2 MRT stops from the development via the Thomson-East Coast MRT line.

The key highlights of Liv@MB are:

The Liv@MB location is a prime residential place in District 15, highly sought after by home buyers.  Here are the key factors on why this location enjoys such high popularity in Singapore.

Liv @ MB location is a URA designated conservation area for “Millionaires’ Bungalows”.  Named after Lord Louis Mountbatten who was the Supreme Allied Commander of the South East Asia Command and also a relative to the British royal family, Mountbatten landed estate is home to the rich and famous.  The unique single-story elevated bungalows were nicknamed “Millionaires’ Bungalows” and some are conserved today and remained a signature of this historical estate.

Some of the famous houses under conservation is 745 Mountbatten Road, a two-story “early modern” style bungalow known as Chan’s Ville.  This is home to the late Dr. Chan Ah Kow and his family of national swimmers renowned in the 1960s and 1970s.  Located opposite Liv@MB is house number 733, a single-story raised bungalow standing on brick posts featuring a grand drive-through porch with columned pillars and a plaster on the porch that bears the year “1929”.  Beautifully restored to its former glory, this majestic architecture received a 2008 UNESCO Asia-Pacific Heritage Award for Culture Heritage Conservation.

With its rich legacy, it is no wonder many buyers are looking for homes in District 15, especially in the Mountbatten Estate.

Based on recent transactions in 2021, the detached houses along Mountbatten Road sold for $11.5 million to $12.3 million. 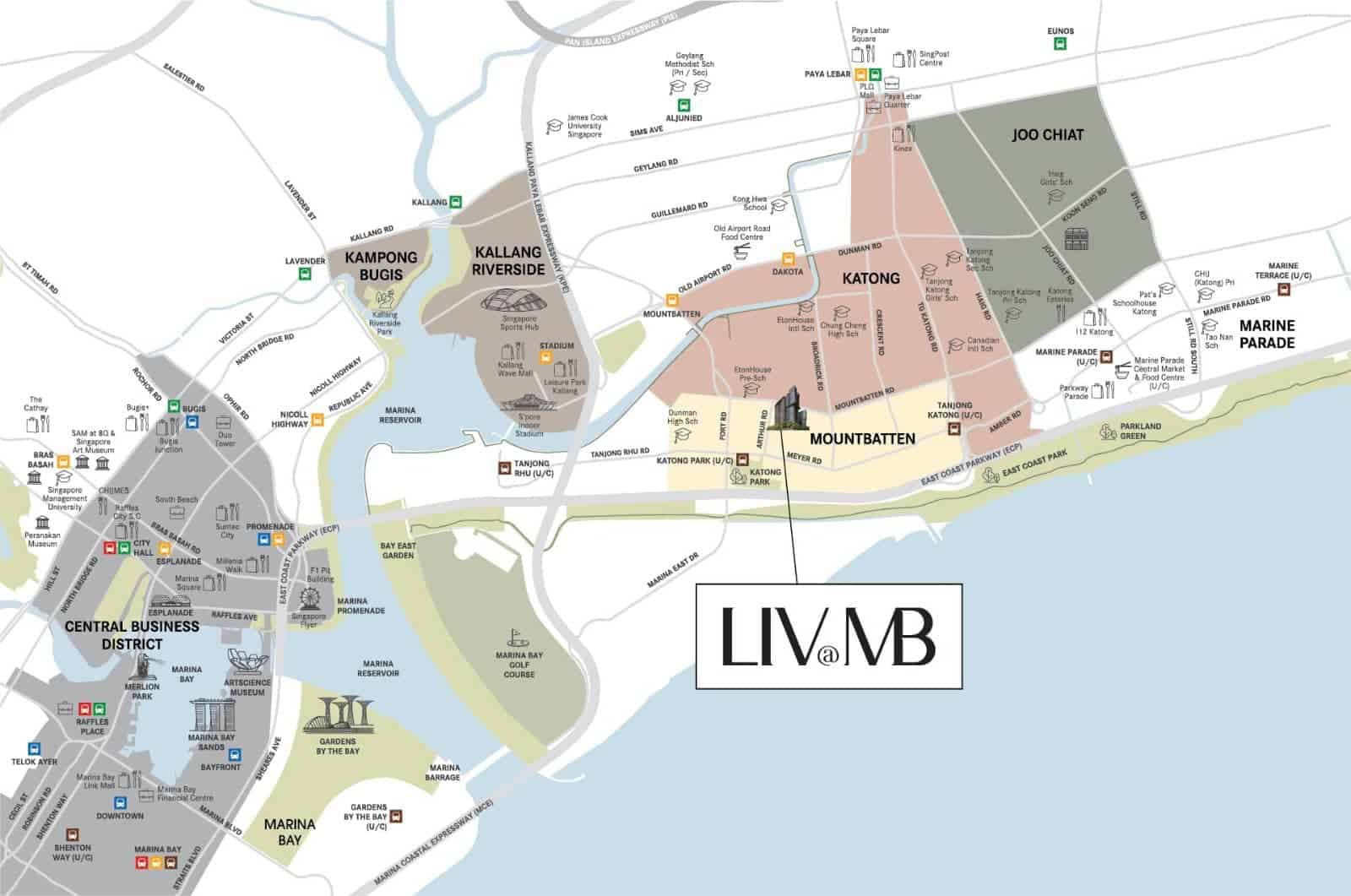 Key Factor 2: Liv@MB Location is in Mountbatten Estate, a Bungalow Enclave Worth Millions in Transactions

Liv@MB location is in Mountbatten Estate, a bungalow enclave worth millions in transactions.  From the junction of Fort Road and Mountbatten Road to the junction at Tanjong Katong Road, this new condominium is surrounded by a renowned landed enclave designated for 2-story bungalows and 2-story semi-detached houses.

Within District 15, there are a few notable landed enclaves.  However, the Mountbatten neighborhood comprises the prime landed areas that are most sought after by homebuyers, especially those looking for bungalows.  Transactions of detached homes in this famous neighborhood (which includes Margate Road, Ramsgate Road, Meyer Road, Broadrick Road, Branksome Road, Goodman Road, Wilkinson Road, and Bournemouth Road) are well above $10 million. 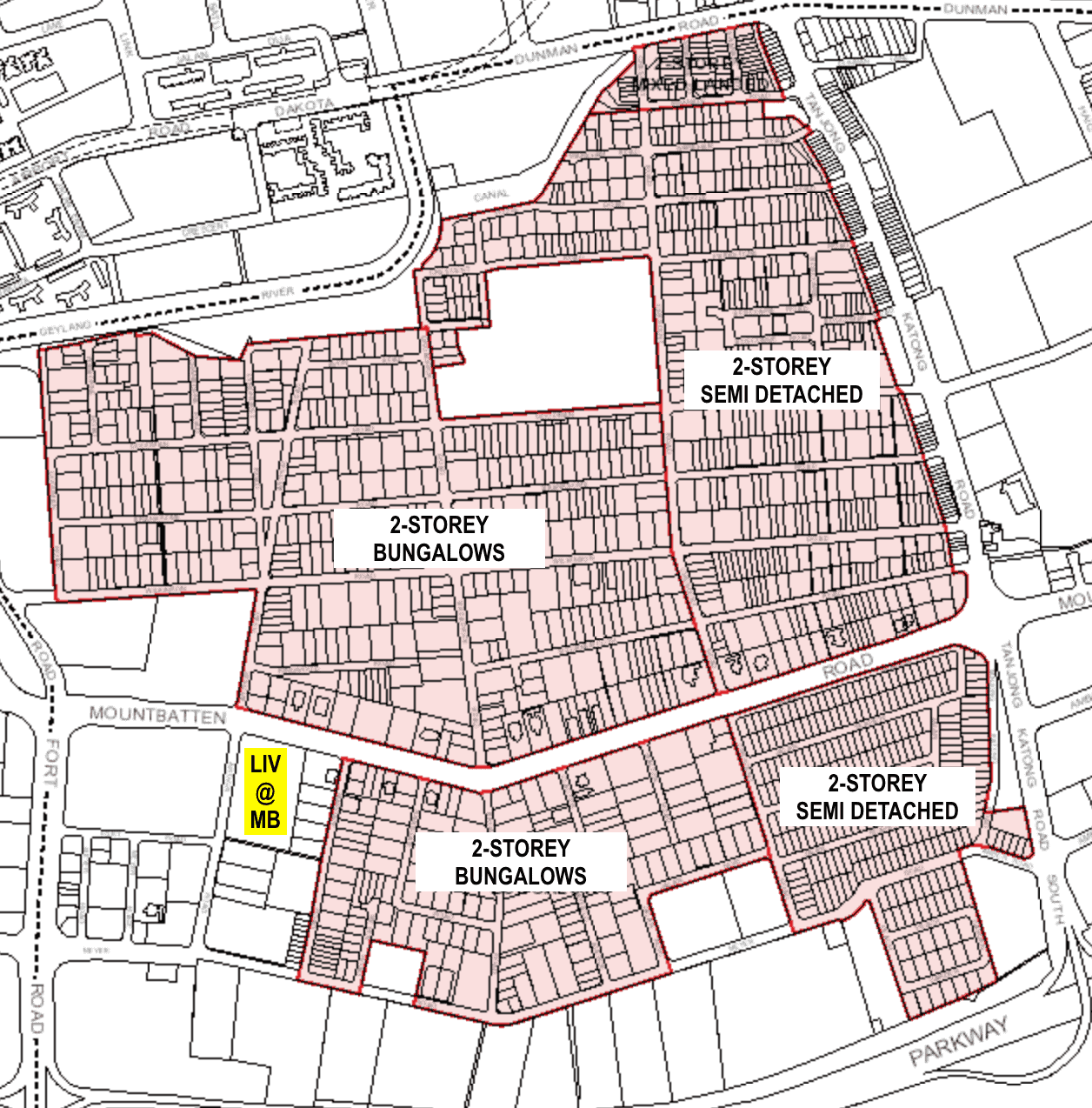 The diagram above depicts the zoning for the landed areas along Mountbatten road, close to the Liv@MB Location.  Source: Edgeprop.

If you are new to Mountbatten and wonder why it is so popular with home buyers, you can google or take a stroll and check out the rich history of this estate.  You will be pleasantly surprised that 15 historical bungalows in Mountbatten are gazetted for conservation by URA.

Based on recent transactions, the detached houses along Mountbatten Road sold for $11.5 million to $12.3 million.

Liv@MB location is only a 3-minute walk to Katong Park MRT station and residents can enjoy great convenience when they travel for work, school, daily essentials, and recreation.  For those commuting to Central Business District, Marina Bay Financial Centre and Shenton Way are 5 and 6 stops from Katong Park MRT respectively.

The nearest shopping mall from Liv@MB is Parkway Parade which is 2 MRT stops from Katong Park MRT station.  With over 250 stores and a cinema in this 7-story mall, Parkway Parade is well stocked with major retailers and supermarkets such as FairPrice Xtra, Cold Storage, Harvey Norman, Best Denki, Marks & Spencer, Uniqlo, Food Republic, and major banks such as DBS, UOB, HSBC, and Citibank.

For other shopping malls, residents can also travel easily to Orchard Road and Great World City via the MRT.   Furthermore, the Thomson-East Coast line also offers connections to other MRT lines at Marina Bay station which offers connections to the Circle line (yellow) and the North-South line (red). 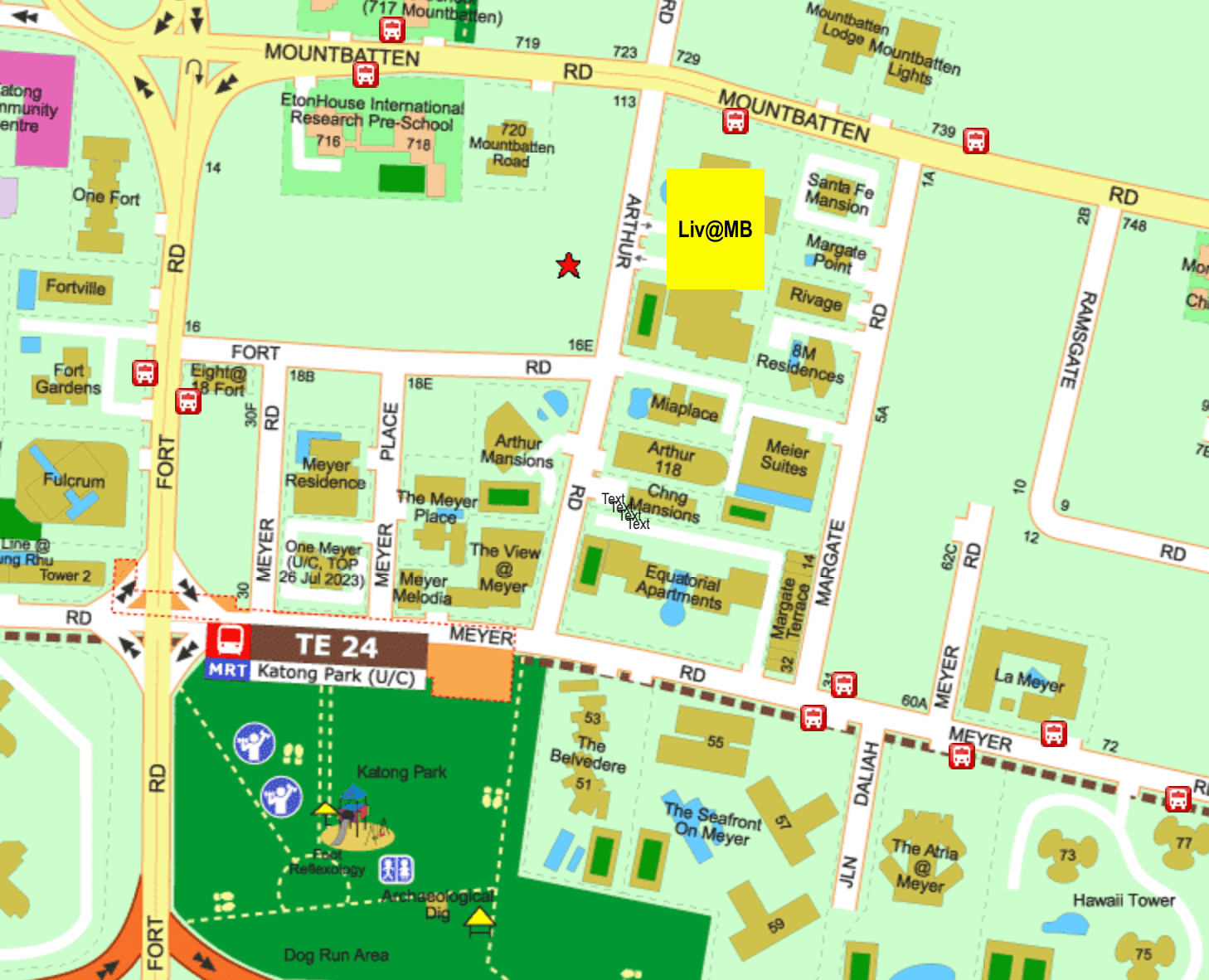 For residents who wish to buy fresh produce at the wet market, the closest one to Liv@MB is the Jalan Batu Market and Food Centre which is about 10 minute walk.  Besides Jalan Batu, the Marine Parade Central Market and Food Centre is only 2 MRT stops from Katong Park MRT.  Other choices located near the development include the wet markets and food centres at Old Airport Road, Onan Road and Haig Road.

Key Factor 4:  Liv@MB Location is About 10 15 Minutes Drive To The City and Central Business District

Liv@MB is only a 10 to 15 minutes drive to the City and Central Business District, via the East Coast Parkway (ECP) and Marina Coastal Expressway (MCE).  In addition, Changi Airport is about 15 minutes drive on the ECP.  With easy connection to other expressways such as Kallang-Paya Lebar Expressway (KPE) and Tampines Expressway (TPE), drivers will find that Liv@MB is conveniently located and easily accessible by a wide variety of transport choices.

Liv@MB location is within walking distance to East Coast Park.  From the 1970s till today, East Coast Park remains one of Singapore’s endearing places for families. Most Singaporeans would have some memories of spending their school holidays or weekends at East Coast Park, enjoying camping, cycling, or having a barbecue party by the beach.  Occupying a total land size of 185 hectares and a coastline of 15 kilometers, East Coast Park is the perfect place for a morning jog or an evening stroll.

Due to the limited supply of land in the Mountbatten area, supplies are mostly from collective sales by owners.  Liv@MB sits on the generous land plot formerly occupied by Katong Park Towers which comprises 111 apartments, 5 penthouses, and 2 commercial units.  Located about 200 meters from Katong Park MRT, the site was hotly contested by 10 bidders with Bukit Sembawang Estates winning the bid with an offer of $345 million in March 2018.  Based on a land area of 140,758 square feet, this translated to $1280 per square feet per plot, with consideration of the lease upgrading premium of an estimated $60 million.

Based on the 2014 Master Plan, the land parcel has a plot ratio of 2.1 and a maximum building height of 24 stories.   The new condominium will offer 298 residential units and 70% of the land area will be dedicated to open spaces, common areas, facilities, and landscaping.  Residents can also look forward to sky terraces that offer the enjoyment of unblocked panoramic views of the surroundings.

Liv@MB and Price Trend Of District 15

District 15 has been experiencing healthy growth over the past years.  The average price per square foot (PSF) for non-landed properties in District 15 has grown by 155% from 2006 to 2021.  This has exceeded the growth rates in prime districts in the core central region such as Districts 9 and 10.  Given the close proximity to the city and the rich amenities in District 15, homebuyers can still find attractive entry prices to own a property in the coveted Mountbatten neighborhood. 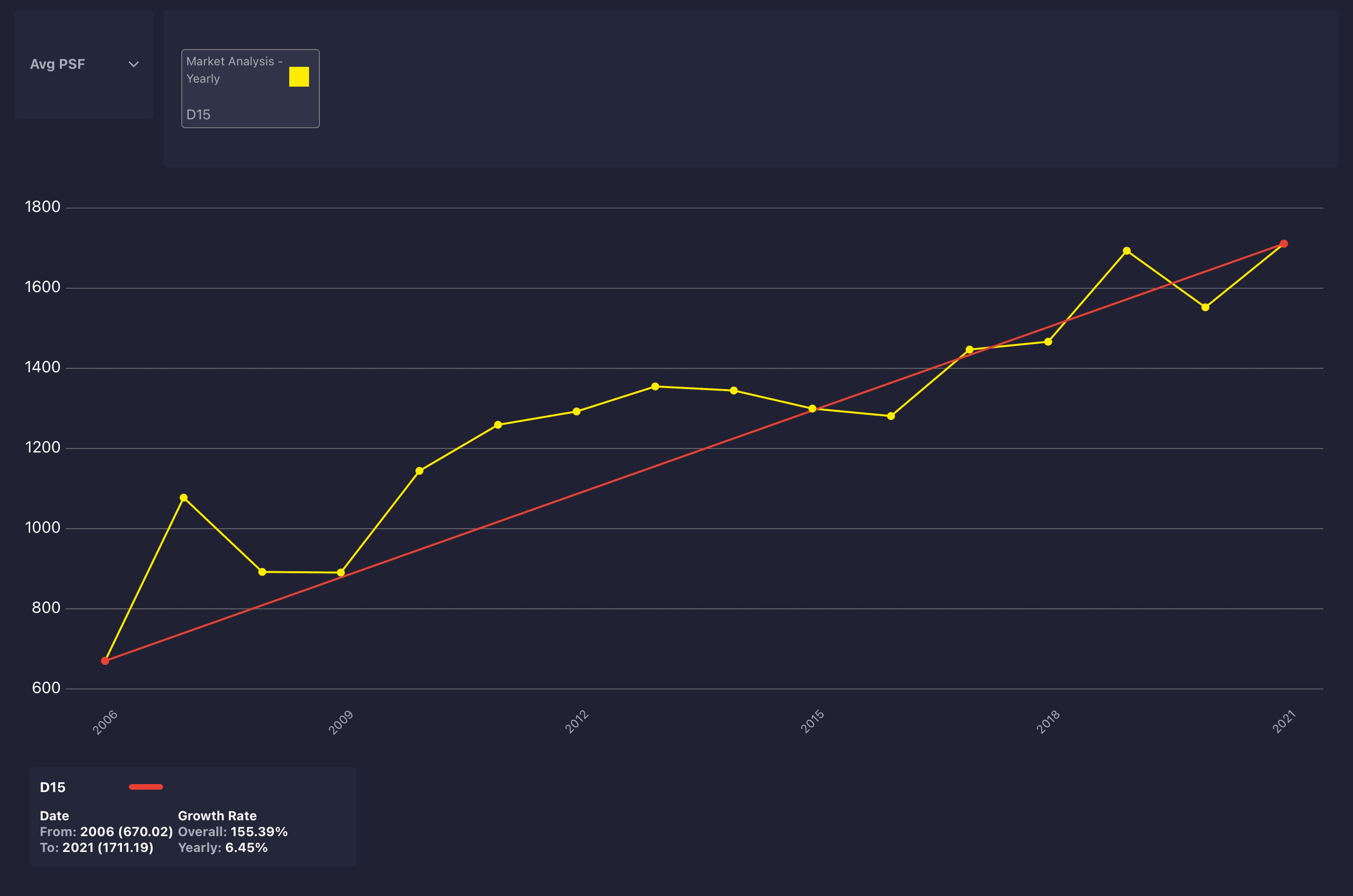 Prime district such as District 9 which includes areas in Orchard Road, River Valley, and Cairnhill, has enjoyed a price growth of 91% over the past 15 years from 2006 to 2021. 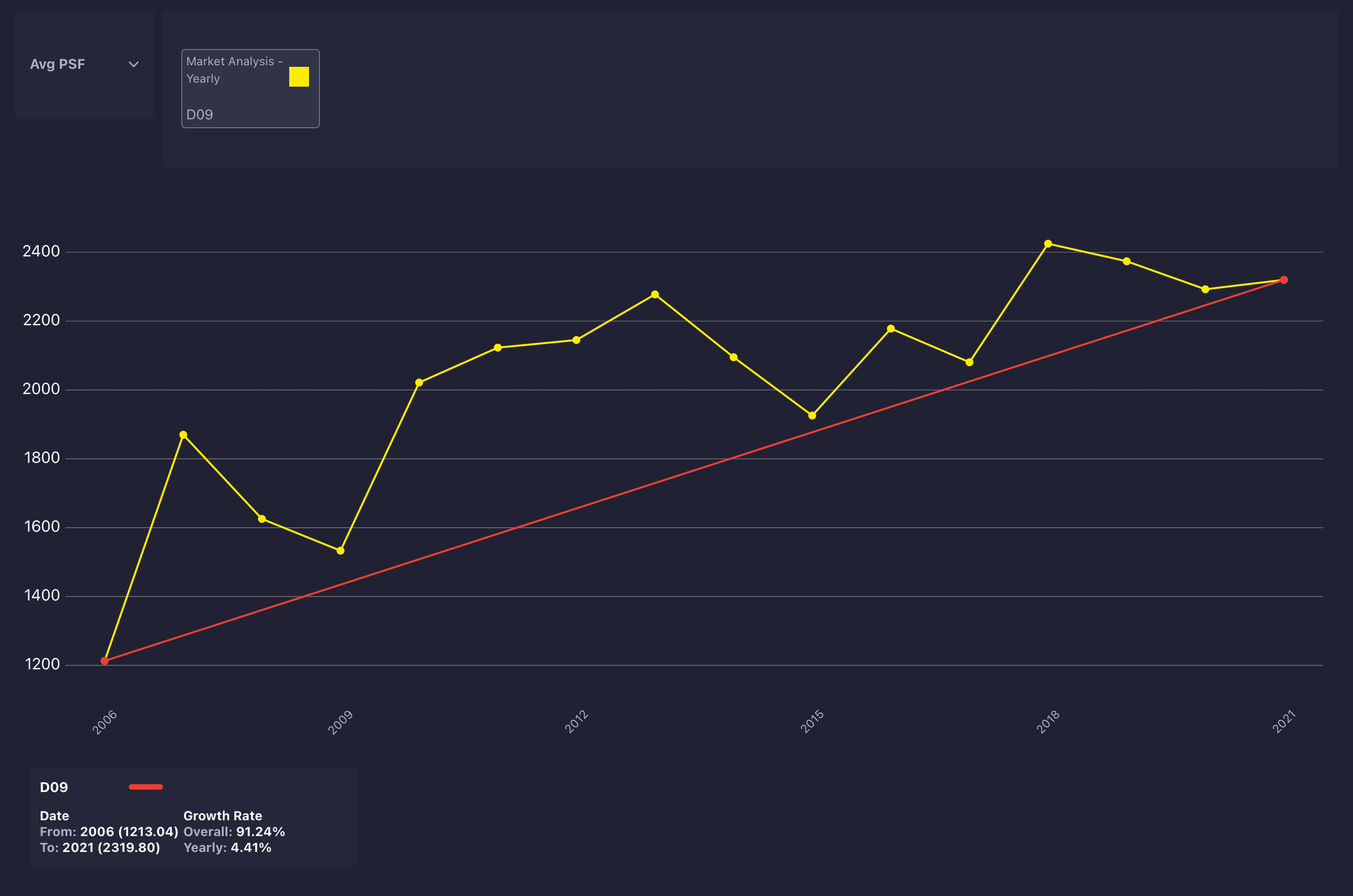 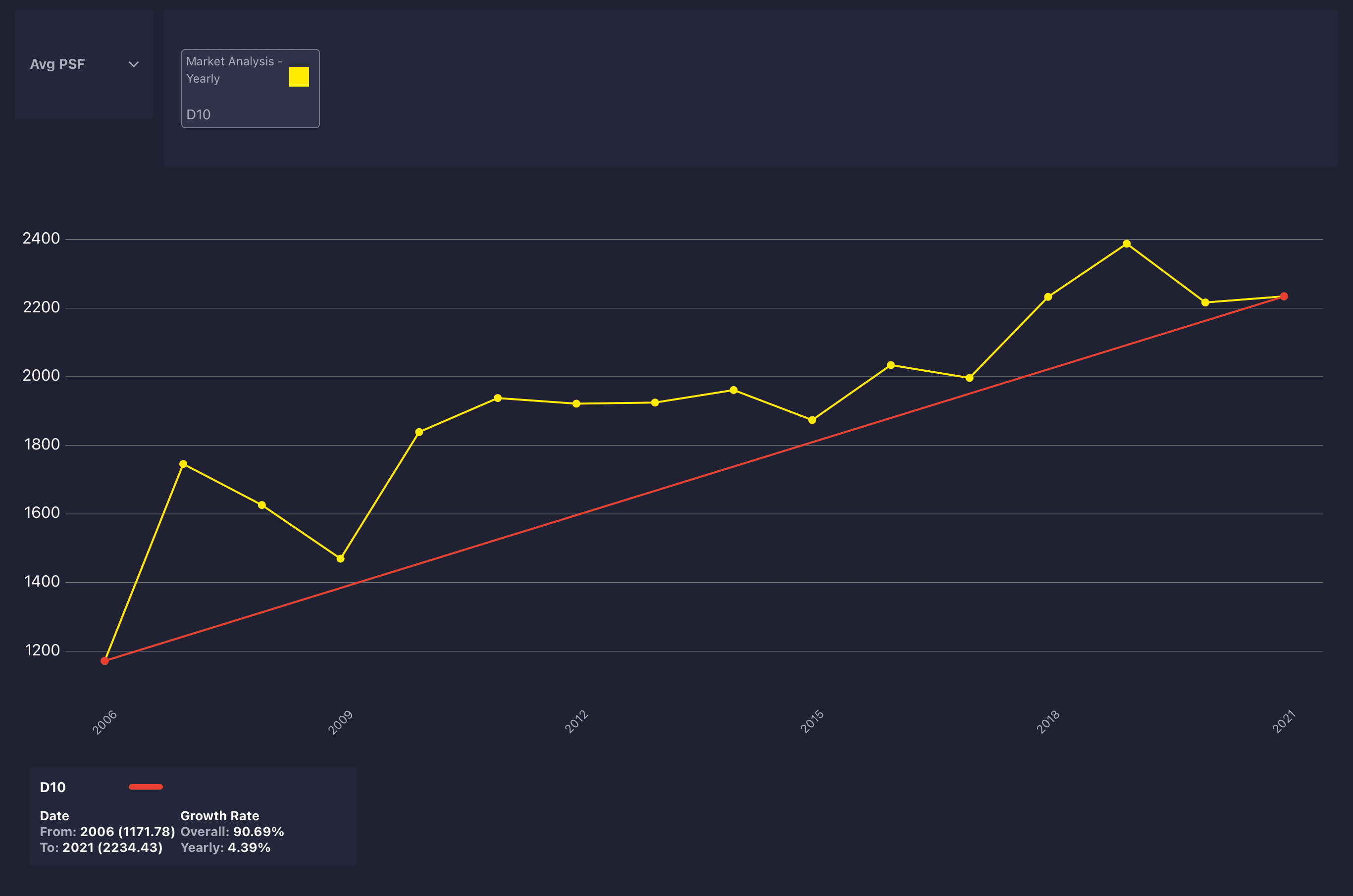 Despite the Covid-19 pandemic, District 15 is one of the top 5 performing districts that enjoyed healthy growth in asking prices based on Property Market Index Q2 2021 by PropertyGuru. 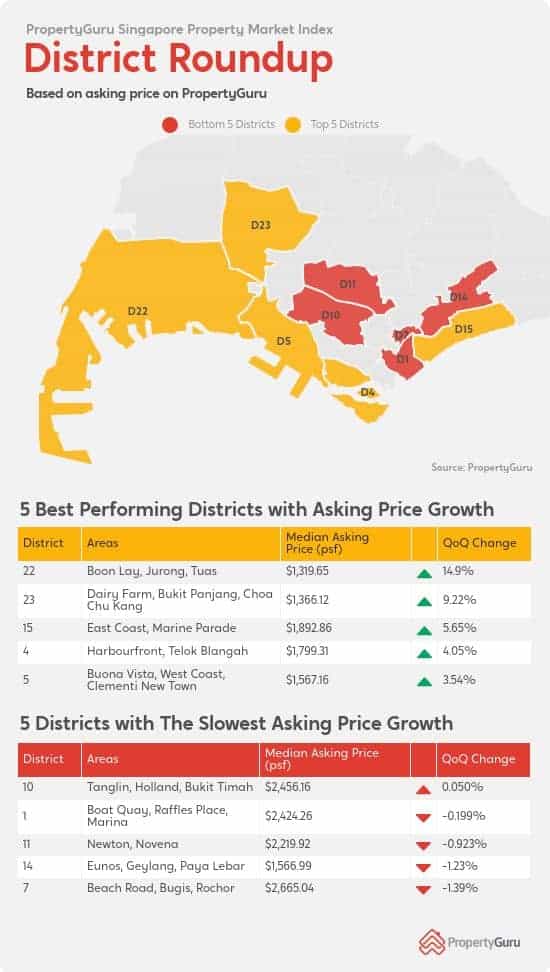 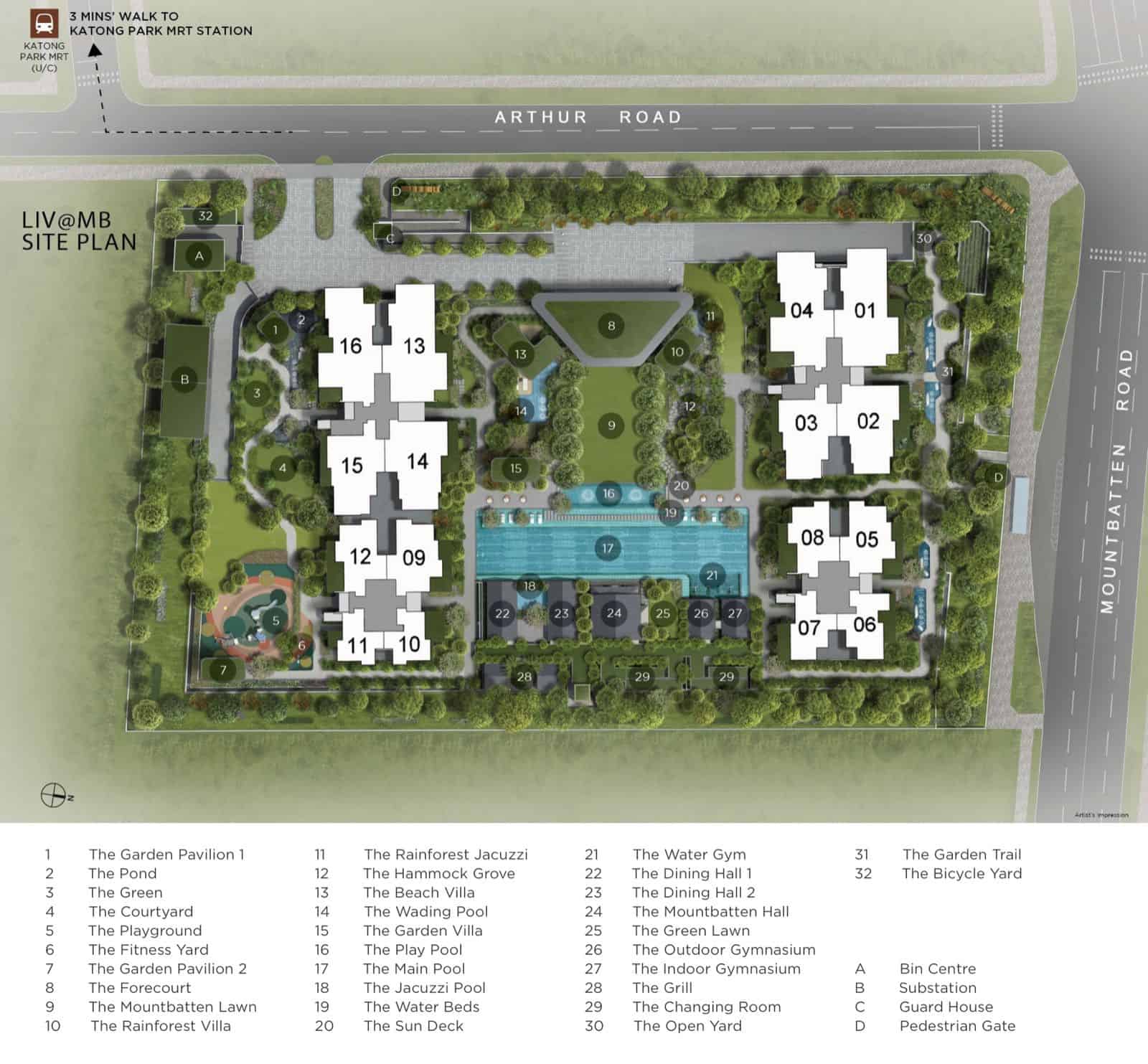 The Liv@MB site plan features important design strategies.  Firstly the development sits on an elevated ground at the intersection between Arthur Road and Mountbatten Road.  80% of the 140,760 square feet of land is dedicated to open spaces, landscapes, and recreational facilities.  The spacious site has a total of 4 residential towers which are made up of a 20-story tower and three 19-story towers.

Taking advantage of the low-rise landed houses, the towers are positioned to optimize the unblocked views of the surroundings.  In addition, facilities are located at various parts of the development such as the 11th floor of the southwest tower, the rooftop of the northern tower, and the Landscape Deck on the ground floor.  This is to provide opportunities for residents to enjoy the different views of the development.

Furthermore, the distance between the northern and southern towers is almost double that of conventional residences and it creates an open and spacious living environment for all the units facing the center of the development.  Lastly, the development provides convenient exit points to access public transportation such as MRT and bus stops along Mountbatten Road.

Incorporated in 1967, the developer of Liv@MB Bukit Sembawang Estate Limited, started as a rubber company in 1911 and later expanded into the real estate development.  To date, the company has developed more than 4,600 landed homes which include many renowned projects such as Luxus Hills, Nim Collection, Watercove, and Mimosa Terrace.  After a 10-year run, Bukit Sembawang launched its final phase of 999-year landed homes in the Seletar Hills estate in February 2020.  After a 2-week preview, the 39 landed homes were completely sold out.  The average prices of the terrace homes sold ranged from $3.35 million to $3.4 million.

Similar to Luxus Hill, Bukit Sembawang has achieved great success with Nim Collection, the 99-year leasehold landed houses located on Nim Road.  The first 2 phases comprising 98 houses are completely sold out and the developer is planning to launch phase 3 with 132 homes in 2022.

In addition to landed homes, Bukit Sembawang has developed more than 1,800 apartment units in prime districts such as Paterson Suites at Paterson Road, Verdue at Holland Road, and the latest luxury condominium 8 St Thomas at St Thomas Walk near Orchard Road.  The completed development comprising 250 units of 1 to 4-bedroom layouts was launched in August 2018 offering buyers immediate occupation or rental.  The project is fully sold and it has also achieved a new record price per square feet (PSF) after a 2,422 square feet unit was transacted at $3,716 psf.